The Rise & Fall of the Business Secretary | Greetly Virtual Reception

The US workforce saw a major increase in the number of secretaries between 1960 and 2000. Today the profession is shifting from businesses to medicine.

We all recognize that receptionists and secretaries play a major, often under-appreciated, role in a well run office. Fewer people are aware of the dramatic changes within those fields over the last half 50 years.

In a relatively short length of time, the secretary profession saw explosive growth. The growth period was followed by a dramatic transition. 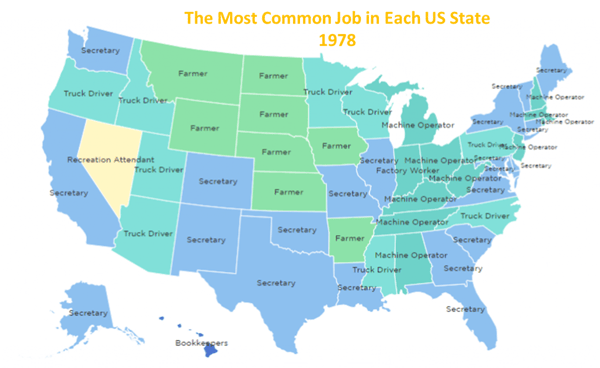 In 1960 there were 260,937 secretaries in the US, according to data from the Minnesota Population Center. At that time secretaries made up 1.1% of the working population. The profession saw consistent and steady growth over the next four decades. In 2000 there were 1,515,653 secretaries, by then 6.2% of America’s employee base. In 1984, secretary was the most common job in 31 states.

The rapid growth in the number of secretaries is generally attributed to larger macroeconomic factors. Secretaries and administrative assistants were borne from the shift from manual labor, industrial and agricultural, towards service industries. The trend was probably further fueled by the increased availability of women in the workplace. More than just a stereotype, to this day the profession is dominated by females.

Secretary: A Profession in Transition

Since the turn of the century, the American economy has continued to add professional secretaries. Yet the growth rate has slowed dramatically. In 2013 there were 1,637,507 secretaries, now 6.7% of the workforce. That means 8% growth in 13 years, compared to a 44% increase in the prior decade.

Technology plays a large role in diminished growth. Specifically the corporate adoption of personal computers and the Internet. Broad access to word processing eliminated the need for dictation, in turn leading to fewer secretaries per employee. Aspects of the secretarial role continue to be replaced by technology. Filing has been replaced by hard drives and cloud storage. Setting meetings and reserving other resources is handled via shared calendars. Today’s modern offices are using iPad visitor management solutions and digital call routing.

Despite technology, my crystal ball (and the Bureau of Labor Statistics) suggests the future for secretaries is bright. The profession is expected to grow 14% between 2012 and 2022, on par with the overall labor market.

Fewer secretaries will be in a traditional business office environment though. Rather, the healthcare field will drive the future of the receptionist and secretarial professions. As of 2012 36% of secretaries were employed in physician, dental or other medical offices. The secretary of the future will also be highly educated in order to support their professional environments.

Like so many other fields, creative destruction has played a major role in the secretarial profession. Shifts in the demand and supply of labor saw generated a massive increase in the number of secretaries between 1960 and 2000. It seemed mass access to computing power and other technologies were going to drive a rapid reversal of that trend. Instead, demand from the healthcare industry has shifted the secretarial base from traditional businesses into medical offices.

A peak inside Amazon Spheres, their new collaborative workspace that features a 70,000 square foot living rain forest at their headquarters in...

How to Be Thoughtful (In an Instantaneous World) | Digital Logbook

The world seems to be moving faster than ever. This article walks through the benefits of being mindful and offers easy suggestions on how to get...

A review of the benefits and disadvantages of using cloud-based software versus the traditional on-premise model.