Then and Now: The Evolution of the Modern Office | Greetly

You may have enjoyed Mad Men's retro look but it had little resemblance to today's modern office. This post examines how technology and design evolved.

You've watched Mad Men and probably enjoyed the retro look of the Sterling Cooper ad agency. It bears little resemblance to today's modern office. Everything has changed from the location(s) of where we work, the hours, the people around us, and the technology. Let's take a look at how we evolved from Don Draper to today.

Look How Far We Have Come! (Or Have We?)

Some evidence suggests the concept of office space dates as far back as ancient Rome, where Romans would conduct business from home offices. The dedicated space was known as the tablinum. (Perhaps then we should also credit the Romans with inventing the man cave!)

Fast forward to the 1950s and the state of the office was bleak. Paper and filing cabinets were everywhere. The lighting was drab. Don't believe us? Visit just about any government office for a working museum.

In the 1970s, monstrous floor-to-ceiling computers were the norm. A sad predecessor to today's coworking spaces was the advent of the cubical farm. While much was done manually, employees were not without technology - they had typewriters, Xerox machines, phones, and overhead projectors. Yet these were a far cry from the office automation we enjoy today.

For better or worse, the digital office of today is a mobile beast that makes the old way look archaic and foreign. What else sets the modern corporate office design apart from those of the past? Here's a quick glance at some of the key differences:

Diversity in the Workforce Over Time 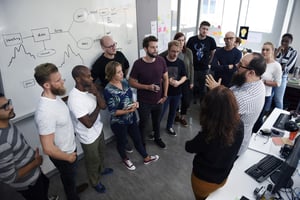 In the 1960s, offices had little racial diversity. The only area of the office that had non-white employees was usually the mailroom. Only about 32% of the workforce was female, and a vast majority of their positions were administrative roles.

The women's liberation movement of the 1970s led to more women in the workplace. Affirmative action helped open up more occupations for women, changing the cultural mindset on gender-specific jobs, but they still had plenty of obstacles—they lost their jobs if they got pregnant, they couldn't report sexual harassment and jobs were limited to gender-specific roles. The leading occupations for women in the 1970s were as secretaries, bookkeepers, and elementary school teachers. Today you still see more women working in "women's" fields—dental assistants, nurses, school teachers—and secretarial positions are still female-dominated.

The late 1980s saw the beginning of the diversity movement in offices. By the 1990s, many companies had instituted policies to prevent racial and gender biases in hiring and to try to bring in more diversity, including diversity and sensitivity training. By the 1990s, the workforce was 47% female, a major equalization. Unfortunately, women earned significantly less than their male counterparts even when working similar jobs.

Some of these challenges remain. 40 years after women entered the workforce en masse, Just 5% of Fortune 500 CEOs are women. Even worse, many working environments remain uncomfortable for minorities and women. These have been noted recently in the technology and Hollywood industries. 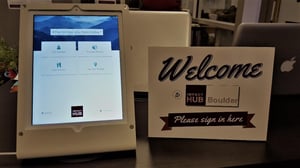 There is no doubt, worker productivity has been rising consistently since World War II. Where the 1970s were riddled with 3 day work weeks, strikes, and electricity shortages - stagflation, the 1980s saw the mass adoption of PCs in the workplace. And even early mobile computing devices.

The worldwide web became easily accessible in 1991. This created free-flowing information. By 1996 more than 9 million people were using it daily - which sounds like a lot, until you consider that 4.1 billion used the Internet last year.

Today, we appreciate massive office automation advancements. Modern corporate office design is built for speed and flexibility. In an era of work/life integration, employees are pampered with perks and modern office furniture to keep them there longer.

In some scenarios, the office has gone away entirely. Global communications have allowed remote work part or full time. Freelancing for clients anywhere in the world and the mass adoption of coworking spaces have also increased worker productivity. As a nice benefit, these changes improve worker satisfaction while decreasing corporate liabilities and overhead.

Making Technology Work for You

In 2007, the moment Steve Jobs and Apple introduced the iPhone, we entered the mobile computing era. This brought a plethora of advantages, including worker flexibility and "an app for that". It also brought a constant stream of distractions into the workplace. Some even worry that humans are beginning to work for our technology, instead of the other way around.

Here are some best practices for making the modern office work for you:

Summary: A Peek Into Our Crystal Ball

As you can see, the office has changed vastly from decade to decade. Gone are the cubicles and floor-to-ceiling devices, replaced by portable and hand-sized digital workspaces. More opportunities arise as further growth allows more people to work remotely and more productively. There is no sign this trend will cease.

The workplace will become more global and more diverse. Put practices in place to ensure you find the best candidate regardless of their background. Consider initial resume reviews without anonymous names and hidden addresses. Pay people equally based on titles and give rewards based on results, not a theoretical outside market value.

You should constantly evaluate new technologies. Do not try to implement everything you see. Instead, look for areas to remove manual and administrative tasks so your team can focus on the highest value projects.

Now it's time to go back to the future.

Today's smart offices are data-driven... Who visits your office, whom they are visiting, and the reason allows you to manage your office more...

We’re talking about how technology has merged with traditional workplaces to make everyone more engaged and more productive in the digital office...

How to Master the Art of Visitor Management | Check-In App

Today's office visitors values efficiency and prefers self-service over interaction with a middleman. Therefore, instead of using your human capital...