7 benefits in shifting from software ownership to subscriptions for companies, nonprofits and government agencies

If your business has been around for more than a decade, you’ve probably noticed a shift in how software is packaged and available for your organization to purchase. Once, you purchased copies of software outright. Now, more and more software companies are giving you the option to subscribe instead of buy. What are the benefits of subscription model software are driving this trend?

Once, your only option was to pony up your cash and purchase copies of a software program. You owned the software on your hardware. It may have included actual CD-ROM copies or multiple licensing keys, one for each user “seat.” Once you bought the software, you installed it on your computers and never paid for it again. That was that – unless, of course, there was an upgrade with features you wanted, in which case the process would start all over again.

In the last ten to fifteen years, however, more software companies have been shifting to a Software as a Service (SaaS) model, which generally includes a subscription. Instead of purchasing copies of software, installing it on computers or servers, and initiating upgrades, you have the ability to subscribe to use a program or suite of programs. Such subscription models typically have multiple subscription levels based on the number of users in your organization.

It isn’t just software moving to subscriptions. The subscription economy has been growing at a rapid pace all over the U.S. and in Europe. Here are some examples:

In addition, those big software purchases come with capitalized costs that can make tax time harder to slog through. For those of us who aren’t accountants, a capitalized cost is related to fixed assets.

On the other hand, a subscription model has a much lower cost outlay.  You simply have the subscription that rolls around every month, quarter, or year, depending on the type of plan you select.  It is an expected expense, like insurance or payroll, and therefore can be included easily in plans and budgeting. It makes for much easier accounting come tax season as there are no capitalized costs. 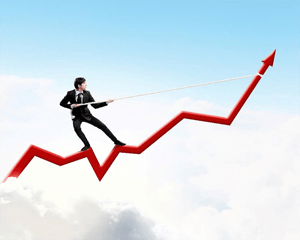 One of the most beautiful things about using a subscription model is the ability for businesses to meet their needs as they grow. If a business finds itself with ten or fifteen new employees that need access to a program, it simply contacts the company to change its subscription accordingly. Since the cost is so much lower to start a subscription than it is to purchase a perpetual license, it isn’t a huge burden on company resources.

And vice versa. If an organization is going through a downtime and needs to scale back expenses, it might be able to make do with a smaller subscription agreement. In the unfortunate event of layoffs, the subscription can be reduced quickly and easily. (Unlike all the computers that may have been purchased for those same workers.)

Some subscription models don’t even require a change in subscription if you were to grow. For example, a visitor registration app offers unlimited users and unlimited use in the basic plan, but more advanced features at a higher price point. While these features might be beneficial based on your size, it is an option you control.

Ability to Try Out Something New

One of the hardest things about perpetual license software is that once purchased, you are locked in. It gets much more difficult to test out something new and change your mind. Not so with subscriptions.

For example, if you are trying to decide between multiple room scheduling software programs, you could easily select a couple to test out for a few months. If you aren’t happy with the features of one, you cancel your subscription.

Of course, not all software subscriptions are strictly cloud-based. Some do have proprietary equipment that needs to be purchased, like security systems with door scanners, and some also have on-premises deployment. It isn’t always easy to change something when you’ve already purchased. And moving away from the “big guys,” like Microsoft or Quickbooks, when all your data history is with them may not be seen as an option.

That being said, as a general rule it is easier to try a new software program than it ever has been before. It is also easier to discontinue using a software or change vendors. Don’t like what you’re using for billing? Try a different company for a while. Don’t think their customer service is up to snuff? There’s likely another one out there that will answer your questions and support requests in a more timely manner. Which brings us to... 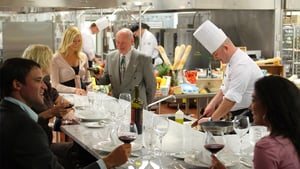 Customers with the ability to change vendors easily and who are handing over hard-earned money on a regular basis have high expectations. They might be more willing to look at new product offerings with better features. They might decide the recurring cost of the current product is not worth the service being provided.

Perpetual software companies have got you locked in. It isn’t much different than the car salesperson. Once you drive off the lot, you’ve got the car whether it’s right for you or not and they’ve got their commission.

On the other hand, a subscription service needs to maintain a relationship with you. The good ones will make it a top priority.

In essence, they will go out of their way to make the service worth the price. They know you don’t have to stay. They know you can cancel at any time. They don’t want you to.

Remember when Microsoft Office rolled out “the ribbon.” (No? I guess I’m dating myself.) This was a new feature of Office 2007 that made frequently accessed menus a default part of the visible screen. If a company had just started in 2006 with Office 2003, it might have been a couple of years before they wanted to shell out the money to upgrade to 2007 for that added functionality.

Subscription software makes that problem a thing of the past. An enormous benefit of this model is that as soon as company adds a new feature, it is added to your software. No new installation or purchase agreement required. The feature just magically appears the next time you open the software.

You’ve probably experienced this with other online and cloud software you use. When Google adds a new feature to gmail, you get a little pop-up notice telling you what is new and offering information on how to use it.

This is a tremendous benefit to the user in more ways than one. You never have to worry about missing out on new features or having out-of-date software. If your visitor check-in kiosk starts offering a new feature, like integration with a new communication method, you’ll immediately have access to it.

As it turns out, the software creator doesn’t really want you using out-of-date software either. It is too much of a security risk.

Hackers are smart. They are creative. And they are always working to find the security holes in a system that may contain valuable information. They write new viruses to exploit them and wreak havoc in our increasingly tech-dependent world. (And sometimes, they do it just for fun.)

Security professionals are always doing the same thing, but with the opposite motivation. They are searching for holes in order to patch and repair them. They respond to threats when hackers discover them and find ways to block or otherwise neutralize the problem.

Subscription software immediately releases the patches and fixes to thwart those hackers. In cloud-deployed software in particular, the updates occur automatically without you even noticing. With on-premise subscriptions, you might be given a notice that an update will be occurring before a computer shuts down.

These updates are one of the most effective ways to protect your data. Out-of-date software is vulnerable to attacks in ways that new software simply is not. If you are still using an old installation of an email program from 2012, chances are it hasn’t been patched in a while. New security features that have become standard are likely missing. 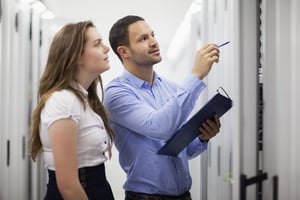 All these instant updates and cloud-computing has another cost-cutting effect: maintenance is greatly reduced. There is no longer a need to schedule maintenance into the rotation. Staff doesn’t have to go from computer to computer to deploy upgrades.

There may even be less need for computer equipment itself. If the software is outsourced to the cloud and accessed via web, there is no longer need for central servers and central storage – or at least not at the capacity that was once required. This has the side benefit of providing the worker flexibility top employees demand.

All this may even translate to fewer technical staff. While there is a great need for IT people to make sure all the software systems integrate well, it is possible there will be less need for “boots on the ground” doing the basic maintenance work, as it will be handled directly by the software companies themselves.

Because subscription software companies are often cloud-based, they know they make their sales over the web. It usually only takes a few clicks to find a price list on their websites. In a few seconds, you’ll find exactly what you need to see if the cost is in line with your budget.

Most will have pricing plans based on the number of users. Some have tiered price ranges (1-10 users, 10-50 users, 50-150 users, 150+ users) while others will have a simple per user price. Some charge by the week, others by the month, quarter, or year. By doing some quick multiplication, you’ll know exactly what the costs will be, and even be able to predict costs if your business grows.

Other pricing plans are feature-dependent or multi-software-dependent. For instance, you can get the Greetly Essential package which includes unlimited legal eSignatures and visitor photo capture, along with several other features. If you later decide you want to be able to print visitor badges, that will require the Pro plan. With Adobe’s Creative Cloud, you can opt for the Photography package, which gets you Lightroom, Lightroom Classic, Photoshop, and 20 GB of cloud storage, or you can go for the All Apps plan, which includes more than 20 applications.

Whatever the pricing plans are, it will be easy to tell at a glance which package you will need and how much it will cost.

Conclusion - Subscriptions Are the Future, and Right Now

Both software companies and companies that need software can find multiple reasons to applaud the change. To summarize:

With these eight benefits to boast of, it is no wonder that subscriptions are taking over the software world.

White paper with 5 tactics coworking and shared workspaces can utilize to grow the revenue and profits without the overhead impact of adding square...

A review of the types of physical security access systems for the modern workplace.