Touchless technology connects computers and users without the need for any form of contact. With user gestures, the computer relays them to valid commands.

What Is Touchless Technology?

Touchless technology is a form of electronics control technology that makes it possible for users to control a digital system without any form of physical contact. The technology enables computer systems to take inputs/instructions in the form of physical movement, facial patterns, voice, and user behavior. These inputs are processed and interpreted by system algorithms to give the desired output or actions required by the user.

The no-touch technology development has been in the works for quite some time. Forbes reported on the fast emergence of touchless technology and how the big techs were taking positioning in the development of their products, as far back as 2008.

Common components of no-touch technologies include an Optical Sensor that detects the input signal and passes it on to a Digital Image/Voice Processor. This processor converts the input signal into an electrical signal that is then used by the digital system to trigger an action. This is how contactless technology works in its simplest form.

A Brief History of Touchless Technology

A quick run-down of notable events in the development process of touchless technology into an industry-wide sensation that it is today included:

The video game industry was (and still is) a fast-growing industry in early 2000. It gave birth to the now very broad touchless technology in the form of a gesture recognition device as a game controller. Touchless interfaces were controlled using inertia-tracking devices such as a wired glove to make gesture impressions on the screen. These were soon replaced with camera-based gesture recognition devices. The cameras use a depth map of light interference to form a 3D representation of hand gestures. The development of optical sensors-based gesture controllers, however, changed the game forever.

One of the most widely embraced games that incorporated no-touch technology was Wii. Wii is a Nintendo video game released in 2005 which accommodated the use of both physical gestures and traditional buttons. The success of Wii was further amplified by the release of a gesture-based multi-touch device, the Microsoft surface in 2007. Gesture-based video game controllers have since then become a common technology in the gaming industry. 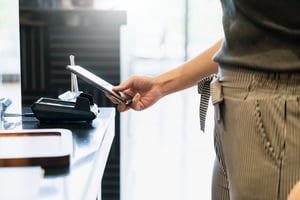 Another industry that caught the wildfire of contactless technology early is the payment sector. What we have today as contactless payment started as a Near-field communication (NFC) technology which was used (and is still being used) for scanning luggage in baggage claim, grocery items scanning. NFC is a type of Radio Frequency Identification (RFID) technology. NFC has now been adapted and widely used for payment at POS by simply swiping debit/credit cards (with NFC technology) near a payment reader. These cards are referred to as contactless cards.

A major milestone and turning point for contactless payment was in 2011 when Google and Android launched their custom mobile pay for android devices using NFC technology. Apple jumped on the pie in 2014 with Apple Pay. These custom mobile payment solutions remove the barrier of the need for a card. For instance, one can make payment with Apple Pay by simply holding the phone over the payment reader's light while placing a finger on the phone's touch sensor as verification.

The History of Touchless Technology at Work

Early use cases of touchless technology in the workplace to the form of:

When the well-being of employees suffers, productivity at work takes the blow and the company eventually suffers the consequences. The increased consciousness to maintain hygiene and stay safe by reducing contact with public surfaces will call for a reorganization of workplaces to allay the fears of employees and visitors.

The main approaches through which interactions with the workplace environment will be made touchless with technology include:

A Shift From Shared to Personal Devices

In light of the growing need to maintain hygiene in the workplace, shared control devices such as the elevator, lighting, and HVAC controls will be personalized. Most of these building fixtures are usually controlled using a shared screen, button, or remote control. Shared control devices are a fast way to promote the spread of germs. Personal control devices in the form of workplace mobile apps, phone cameras, and wearables take the center stage to ensure a contactless workplace

An employee can control their work environment right from the comfort of their chair using workplace apps. A room's lighting and temperature, as well as shared printing gadgets, can be controlled from personal mobile devices. Personalized control such as these does not only reduce the risks of infection but comes with great flexibility and comfort for users. 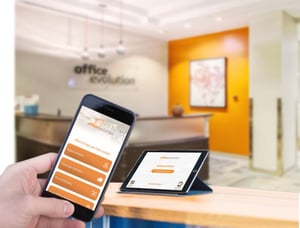 Instead of exposing a receptionist to illness, or requiring that visitors use a shared kiosk, modern visitor sign-in apps allow visitors to check themselves in on their own smartphones. These no-touch visitor management systems allow for contactless entry while still capturing all necessary visitor information, like COVID-19 screening questions. They even store the information in a cloud-based visitor log for contact tracing or other workplace analytics.

The additional upside to using these touchless access control technology is that it comes with innovative features that ensure a smooth visiting experience for visitors. For instance, an employee expecting a visitor can immediately be notified with a voice call, text, email, Teams, Hangouts or Slack message once their guest checks in. The host in return can greet the visitor with a click, giving productivity a boost. No-touch technology for visitor check-in creates a safe and frictionless experience for all parties.

Another crucial aspect of this decentralization of workplace systems is contactless access control. Workplace access control is largely dominated by biometrics authentication and the use of key cards. To ensure more frictionless, safer, and smart access control, a shift to touchless technology for access becomes inevitable.

Facial recognition access control systems are another no-touch technology that comes in handy for workplace areas that requires a higher level of security. Facial recognition systems detect facial patterns and compare them with what has already been stored in its system to confirm access. Though there are a few privacy concerns trailing this type of access control solution, its use is growing faster than the concerns.

Use of Voice-Controlled Digital Assistants

These digital assistants have proved themselves resourceful in homes and are fast gaining traction for a contactless workplace as well. These digital assistants are a good way to network shared building fixtures together for easy control without the need for physical contact. Alexa for business, for example, has two categories; personal and shared devices. The shared devices are the ones placed in the public space.

An employee can simply give a voice command to a shared Alexa device to have a window blind opened or control lighting without having to touch any surface. Personal devices on the other hand are a great way to boost employees' productivity. Repetitive tasks can easily be automated by creating simple tasks set-up for use.

Use of Gesture-Based Touchless Technologies

This type of touchless technology allows users to control a digital system with motion gestures as simple as a wave of the hand, finger-pointing, or even an eye gesture. It has gained a lot of traction in the gaming world and will soon become a thing in workplaces. Gesture-based no-touch technology uses an optical matrix sensor with a lens to detect motion that is translated into on-screen gestures. These optical sensors are independent of the digital device interfaces but are usually placed near them. However, the sensors are now being made to fit into digital device screens. The motion of the hands is detected by the lens on engaging with the line-of-sight of the sensors.

In the case of eye-tracking gesture control, the interface uses a portion of light reflected from the eye to determine the location of the head and pupil, which is used to guide interaction with the screen. It is safe to refer to a gesture controller as some sort of virtual mouse or keyboard.

A gesture-controlled user interface can detect and interpret 3-dimensional hand gestures without a need for any kind of wearable. It practically knows where your wrists and fingers are. This is a more hygienic replacement for the shared touch screens such as navigation and presentation screens in workplaces.

Gesture-based contactless technology can also be implemented in access control systems such as for non-secured doors where personalized control devices will be too cumbersome for use. This technology can sense movement towards it as far as 5 feet away to open by itself and grant access. Access and control of a gesture-based interface can be via:

Implementation of a contactless workplace using no-touch technologies opens up a well of data. Touchless technology in the workplace is a frictionless and hygienic way with which employees and visitors interact with the workplace environment and systems. When the data of these interactions are collected and carefully analyzed, it gives valuable insights into how to better design the environment for an even more seamless experience.

For instance, a particular employee that always wants their office at a certain temperature range or a lighting hue will have the conditions automatically activated once they open the door via a gesture control system. Insights into the number of people accessing a particular area of the office or walking by a corridor per time can also help with the space design. The use of workplace interaction data is limitless.

While this might sound like some kind of sci-fi stuff, it is real. Scientists are working on enabling human thoughts to control digital devices. This brain-click technology is being pioneered by Facebook and other big tech companies. It started with sensors implants in the brain but a lot of progress has been recorded with the development of less-intrusive means such as wearable bands.

Though the development of the brain-computer interface is leaned towards making it an assistive technology, its use in a contactless workplace cannot be completely ruled out. Imagine being able to type hundreds of words per minute on your personal computing devices by just thinking. It will bring a complete shift in how work is done.

Conclusion: Touchless Is the Key to Workplace Healthy

Touchless technology is a fast-emerging technology with a lot of growth opportunities hence; modern workplaces should embrace it as early as possible and grow with it. As the most important elements to keeping your office healthy is the front door, and all doors, expect this technology to emerge rapidly to more thoroughly suit your workplace safety needs.

Is technology in the workplace a boost to office efficiency or a cause of countless interruptions? Use these 3 tips to make sure technology works for...

Worried that technology is at odds with giving white glove service? Worry no more. See how The Farm SoHo uses high tech to create a high touch...

You might think of technology as the opposite of high touch. Rather, today's high-touch technologies nearly perfectly customize the user experience.