A review of the types of physical security access systems for the modern workplace.

Security is an aspect of organizational life that more and more people are taking very seriously. It keeps people and property as safe as possible. A thoughtful security protocol informs employees what to do in cases of emergency, whether from natural disasters (e.g. floods or fire) or from human hands (e.g. accidents, sabotage, or violence). It strives to prevent human-induced hazards from occurring, as well as to prevent physical and intellectual property theft.

Unfortunately, for some businesses just starting out, security is an afterthought. Many small offices start working with simple door locks and passwords on their computers. But as companies grow and the stakes get higher, it is likely they will have to think more carefully about security, conduct security audits and form a plan. Part of that plan will be considering what kind of physical security access control system to use.

Barriers to physical access can be either physical barriers – a locked door, a turnstile, a fence – or barriers of authority. A barrier of authority is a person or a sign explaining any restrictions. Think of a restaurant with a sign on a door stating, “Only employees beyond this point,” or a hospital receptionist admitting visitors during or outside visiting hours.

When we talk about physical access control, we are primarily referring to the system of physical barriers which work in combination with authority barriers and authorization plans to allow appropriate people in, and keep everyone else out.

Physical access control is at the heart of any good security plan, ranking right up with there with digital security. While digital security protects information – which can obviously be used to damage a company or individual’s reputation, finances, or performance – physical security protects people and equipment in a more visceral way. The evening news is full of the unfortunate consequences of a violent person walking into a workplace with a weapon. In a less dramatic fashion, physical barriers can prevent unknowing people from wandering into server rooms or other spaces with hazardous materials and equipment.

In the modern era, physical access is very often controlled via a physical access control system, i.e. software and hardware designed to work in combination with electronic door locks and authorization guidelines. These systems translate an organization’s guidelines about who has access to what (e.g. rooms, equipment, vaults, etc.) into verification that locks and unlocks access.

Such a system will contain a database of different access levels and lists of which people belong to those access levels. It will actually control the locking mechanisms on various doors and barriers in accordance with the access level of the person providing credentials.

The beauty of access control systems – as opposed to issuing actual keys to open physical locks – is the ability to designate which credentials can open which doors, and to turn off access at a moment’s notice. It is far too easy for a physical key to be lost or stolen, requiring physical door lock changes that are quite costly.

Here are a few examples of why this functionality is helpful, using a hypothetical company that uses a key card access control system:

Access control systems can generally be classified into two categories.

The produces use a credential scanner near the door/access point and a control box, usually located above the door. The control box communicates with the credential scanner, the door locks, the computer that runs the system, and sometimes with cameras. Everything is wired together.

The benefits of traditional systems include: 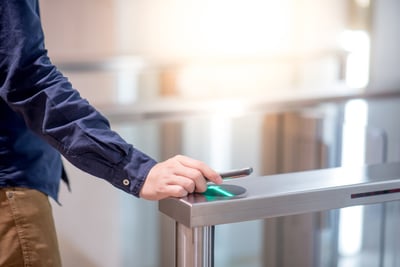 Modern workplace access systems are based on internet technology. They don’t require a control box. Instead, verification is handled at the credential scanner which is connected to a network containing all the necessary information. The credential scanner will obviously need electrical power and network access, which can actually be delivered through the same wires.

IP-based systems can be further divided into two additional categories: network-based and web-based.

Advantages of IP systems include:

What to Look For in an Access Control System

Choosing an access control system for your organization is a decision not to be taken lightly. It is important that the system has the features you want at the right price.

Perhaps the most important aspect to consider, aside from the security level, is whether the system will work far into the future. Considering the cost of vetting, purchasing, and installing all the components, this is a system you will be working with for quite some time. Taking the time to evaluate it from a forward-thinking perspective is absolutely vital to ensure it will do what you need it to for years to come.

That being said, here are some things to look for as you consider what you’ll need for years to come.

Where to Start Looking

Once you’ve determined that you need a physical access security system upgrade, it’s time to start looking and evaluating. Here are a few of the key players in the market.

There are many more companies out there and several online reviews to help you get started on the path of picking the right one for your organization.

Good security starts with good physical access control. Knowing who is in your building and that they have the correct authorization to be where they are is vital to keeping your people and your property safe. An access control system is a tool that makes the process significantly easier and more streamlined than the days of having to issue physical keys.

Credentials can be vetted and multiple layers of security put into place using one system – and generally one easy-to-use interface. Your organization can rest easier with the right access control system keeping an eye on the doors of your organization.

Both physical and data security are necessary for modern office productivity. This article covers an overview of workplace security and how to get...

7 benefits in shifting from software ownership to subscriptions for companies, nonprofits and government agencies